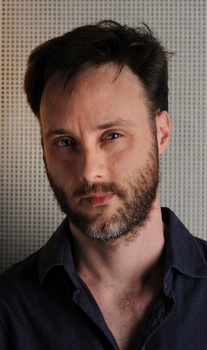 Since his beginning as a composer,  Roque Rivas has found a   deep reservoir of musical ideas in other artistic disciplines, primarily visual arts and architecture. Not sources of inspiration in the strict sense of the word (while these disciplines inspire him, he refuses any sort of musical illustration), but as sources for intuitions, as ways of thinking about different compositional aspects: space, harmony, colors…

For  Campo Abierto (literally “Open Field”), Roque Rivas examined the problem of perceiving volumes and distances, beginning with perspective, transposed in the composition to reconsider the spatialization of the musical discourse, applying, for example, the principle of vanishing points to different partials in the sound spectrum to create effects that modify the distance of a sound source.

“In the domain of visual arts, artists have several ways of dealing with perspective. While vanishing lines are the most well-known techniques, there is also aerial or atmospheric perspective which consists of marking the depth of the space through a progressive gradation of colors and progressive blurring of contours.  The harmonic spectral material might contribute to this suggestion of distance in the same way as cold colors: with the same force, a rich spectrum is perceived as coming from everywhere in the concert space while a more reduced spectrum is seen as more localized.”

When it comes to colors, Roque Rivas also finds harmonic grammar ideas in the works of Joseph Albers (1888-1976). A painter in the Bauhaus movement, Albers worked extensively on the interaction of colors from a vantage point with the perception of forms and volumes. He creates the impression of a relief with a 2D image by juxtaposing different colors: depending on how we color the sides of a 2D cube, our perception of the cube changes.
The composer is also interested in mise en abymes, in distortion through anamorphosis, in convex and concave mirrors, etc.

The issue is perspectives and, above all, the perception of perspectives. One of the major technological concerns in Campo Abierto is, of course, spatialization. While the sound diffusion system chosen seems fairly classic (loudspeakers placed around the public from the ceiling), Roque and his computer music designer Augustin Muller decided to clean the slate of their knowledge in terms of spatialization, forming a new concept of sound space based on what is ‘tangible’ and ‘perceptible’.This concept of spatialization is less interested in the ‘trajectories’ of sounds than in the spatial distribution of spectrums, chords, or even rhythms and the impact of the evolution of the spatial distribution on our perceptions of harmony or the sound space.

“It’s a two-way street,” begins Roque. “If I place a chord into the space (via the loudspeakers of using the arrangement of the musicians on stage) and then change this placement, we have the feeling the chord last longer but its color is nuanced as is its occupation of the space. In this regard, the principle of perception is, above all, a way of tricking our senses (sight in painting, hearing in music): we recreate 3 dimensions from a flat surface. By playing with the placement of the vanishing point, we can create effects of anamorphosis, deformations, etc. Our first job was to formalize the spatial behavior of specific sound material in relationship with each type of movement. A task that was, first and foremost, empirical and required several tests on partials, even on sinusoids, to come up with formal strategies for writing the space. Too often, when working on spatialization, the processes are too sophisticated or the concert hall is unsuited for the spatialization and we can’t really hear the work carried out. For me, I want everything to be audible.”

This is: Roque Rivas

Images of a Work #15: Assemblage by Roque Rivas